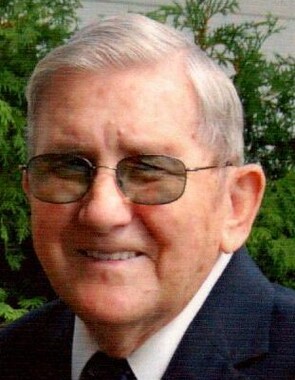 Back to Donald's story

Donald Irvin Riley, 87, went to be with his Lord and Savior Friday, Jan. 17, at his home in Goshen.
He was born Sept. 26, 1932, to William A. and Edith (Eslinger) Riley in his grandparents' farmhouse in Bremen.
He is survived by his wife Pat; a daughter, Sue Ann Riley, Goshen; a son, Jerry Lee (Donna) Riley, Goshen; two granddaughters, Julie Ann (Philip) Kilmer and Ashley Nichole (Kevin) Graber, both of Goshen; great-grandchildren, Hudson Riley Garber, Sofie Ashley Kilmer and Phillip Deacon Kilmer, all of Goshen; and a brother, Larry D. Riley, Osceola.
He was preceded in death by his parents and an infant great-granddaughter.
Mr. Riley graduated from Nappanee High School in 1950. He worked for Kroger's and met his future wife in 1950 at a YFC roller-skating party.
Don was called to serve his country in December of 1952 during the Korean Conflict and served in the U.S. Army. He was discharged in November 1954. When he returned home, he married Patricia E. Smith, Jan. 7, 1955.
He was a member of Brenneman Church, where he designed and built the baptistry and the sound system they still use today and served as a trustee on the church board.
While serving overseas in the Army, Don did carpentry work. When he came back to the States, he gave up his Kroger job, and became a full-time carpenter. He was employed by Gaylord Miller Construction, Arvid Swanson Construction, Art Stauffer Builders and Homestead Builders, all of Goshen. After retiring in 2001, he enjoyed making crafts and gifts from his carpentry skills.
He was a wonderful husband, father, grandpa and great-grandpa.
Visitation will be Thursday, Jan. 23, from 2 to 4 and 6 to 8 p.m. at Yoder-Culp Funeral Home and Friday, Jan. 24 from 10 until the 11 a.m. funeral service at Brenneman Memorial Missionary Church. Officiating will be Pastors Craig Garber, Harold Knight and Matt Maloney.
Burial will follow at Violett Cemetery.
Memorials may be made to Brenneman Memorial Missionary Church.
Online condolences may be shared at www.yoderculpfuneralhome.com.
Published on January 18, 2020
To plant a tree in memory of Donald I. Riley, please visit Tribute Store.

Plant a tree in memory
of Donald